One thing MMO-space has just been unable to do thus far is create a first-person shooter that really captures the MMORPG feel. This past week I’ve been playing one called Firefall, which officially goes live on July 29. After that week, it’s time to pass judgment.

Firefall takes place in the not-too-distant future as the world is threatened by a spooky phenomenon known as the Melding. Visually, the Melding looks like a very spooky dark shroud has fallen over parts of the world, a gloomy wall of darkness which mutates people and animals into terrifying mindless beasts bent on the destruction of humanity. It’s all pretty simplistic and a touch cliché; the writers of this game won’t be joining the ranks of sci-fi greats anytime soon. The player characters and NPCs populate a large community/military outpost just outside the Melding. Players take on the role of an ARES pilot – a mercenary working for a loose organization that is assisting the ‘regular’ military in protecting the community and investigating the Melding. 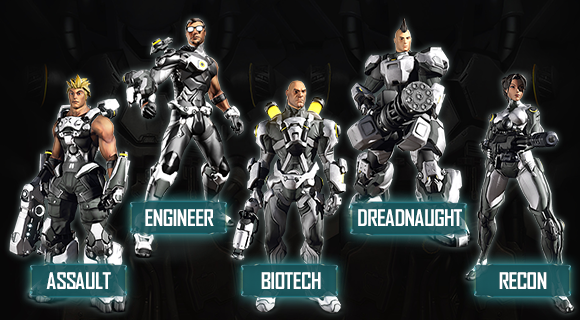 ARES pilots drive Battleframes, which serve as your shield, armor, weapons systems, and class while you’re in game. There are currently five different frames in game, each with two ‘advanced’ frames available. They fill pretty standard roles: Dreadnaughts have heavy armor and large, slow weapons, but little mobility, Recon frames use a medium-long range scoped rifle and are faster, but have much lighter armor, and Biotech frames are able to heal their companions. Battleframes are interchangeable and free to change; if you feel like playing Biotech one day, you can switch right into it – no need to create an alt. In fact, the game seems geared against alt creation. The only thing you always keep is your name or ‘call sign’. You can change your gender or appearance at any time for free.

Gameplay is pretty standard first-person/third-person shooter (you can play it either way) with a lot of z-axis mobility involved. If you’ve played Tribes (or any other shooter with limited flight or lots of big jumps), you’ll be right at home. Jet-packing around is really one of the most rewarding aspects of the game. Dropping right into a group of mobs while raining fire down on them is immensely satisfying.

There are quests available, but much of your leveling time will be spent in dynamic events which spawn at random times in different areas of the map. Defining a dynamic event is difficult, so let me give you an example. While travelling, you come across a downed thumper (more on thumpers later). Interacting with the thumper spawns a set of replacement parts at random spots nearby – your objective is to pick up the replacement parts (rendering you temporarily unable to defend yourself) and bring them back to the thumper. It also, however, alerts packs of hostile mobs in the area which will spawn in and attack you as you perform this task. Any players in the area can join in, either covering the players bringing parts in or fetching parts themselves, and once enough spare parts have been brought back to the thumper the event is concluded. Everyone involved gets experience and some material rewards (usually crafting materials). The instant teamwork these events promote really make for a great cooperative experience. I often spend nights just cruising for dynamic events.

Crafting is remarkably robust in this game. Material gathering is performed by salvaging items found in the field or by a practice known as ‘thumping’. A thumper is a mining device which is activated on the ground. While it drills away and stores raw materials, mobs in the area become irritated and will attack it (and you). Other players often seem quite willing to join in defending a thumper; it’s great experience and blasting mobs is always a good time. Characters are able to craft (through a combination of refining, research, and manufacturing) weapons, ability modifiers, health packs, and even vehicles.

While the game client and all of its content is available for free, it has a large cash shop with a variety of items. There is also the option to purchase VIP time in increments of 24 hours up to 3 months. VIP time gets you more experience, better drops, and access to some VIP-only tools available in-game. I’m currently playing on VIP time, so I can’t comment on the experience as a free player. Red Five, the developer of Firefall, claims the only items available in the cash shop that cannot be obtained through normal play are purely cosmetic.

Firefall’s not going to be for everyone. The open-world, frenetic, shooter combat with mobs and characters flying about isn’t for everyone. If your MMO experience is limited to Wizard and Pirate, this will be like walking onto a different planet with very little familiar. Even if you’ve played some World of Warcraft or Rift very little of this will feel familiar. However, I have greatly enjoyed it and look forward to playing it as the game evolves. If you’re a fan of shooters, it’s very much worth a try. If not, you’ll find nothing to like here.

Firefall will be released on July 29, 2014 and is free-to-play. Firefall is currently unrated by the ESRB, but will probably earn a rating of T for violence and the occasional use of harsh language. You can learn more at http://www.firefallthegame.com.