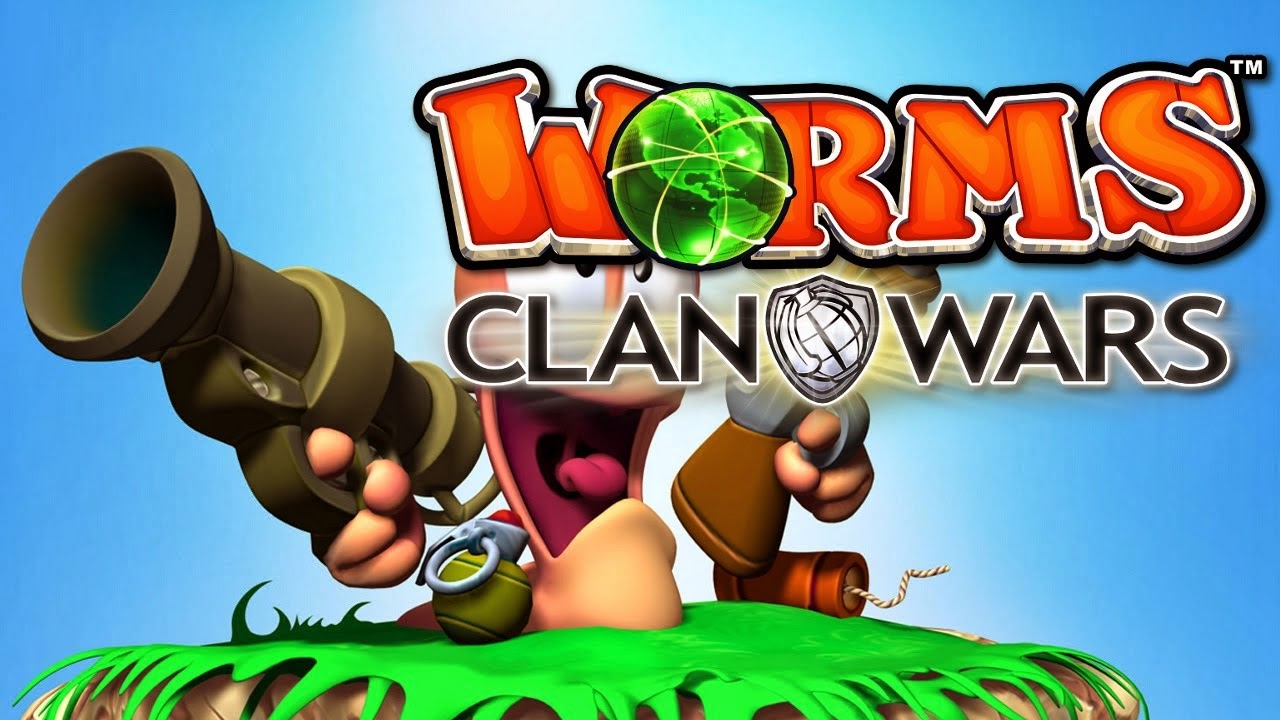 It’s time to talk about a gaming franchise that’s near and dear to my heart. Yes, they’re not just good for fishing and creeping out one’s younger sister – I’m talkin’ about Worms. Specifically, the 2013 entry into the Worms family: Worms Clan Wars.

If you haven’t played Worms, I can sum it up pretty easily: it’s a two-dimensional turn-based “artillery combat” game in which teams of Worms move around a destructible landscape and attempt to destroy one another. The weapons involved range from the traditional (like the baseball bat, the shotgun, or the bazooka) to the interesting (like the homing missile, the airstrike, or the cluster bomb) to the truly bizarre (the holy hand grenade, the water balloon barrage, or the explosive sheep). Worms can be taken out by reducing their health to zero or knocking them off the edge of the battlefield into the deep water below.

Combat is largely skill-based, and requires figuring out just the right weapon, angle-of-attack, and power behind each shot to hit for maximum effect while minimizing damage to your own team. Movement is also a big factor, as cover and high ground advantage can mean the difference between a devastating hit and a wormy flesh wound. And while worms are able to inch along and even make small jumps, the game provides fun ways to traverse the map like jet packs and ninja ropes.

There is a definite skill-curve to the game, and learning the weapons, the positioning, the different ‘classes’, and the strategy behind this deceptively complex little game takes practice. Thankfully, one can pick up the basics in just a few rounds, and it has the magical quality of providing joy in failure – the worms are just so endearing and funny that even in defeat it’s very difficult to be angry at a mistake or a bad shot or an opponent really clobbering one of your side. The game provides a tutorial and a robust single-player campaign to hone one’s skills before waging war against friends or rivals.

Clan Wars brings in a feature found in many multiplayer games. Support for player-created clans and clan v. clan conflict really takes the already very satisfying multiplayer aspect and really brings it to a new level. It also supports an incredibly robust level of customization for your worms: my team is currently named Bruce, Clark, Hal, and Oliver (all DC superheroes), they wear superhero masks, their catch-phrases are all Internet memes, and their victory dance is ‘Gangham Style’, which may be a little dated, but looks really funny when a little pink worm does it. Jeff has an all Wizard101-themed team.

One last item before we wrap-up: the game includes Steam Workshop support and tools to create your own levels. There are some REALLY imaginative and well-done battlefields available as free downloads on the Steam Workshop that can be easily integrated into the game, giving you a nearly infinite set of fields of glory for your squirmy little armies.

Needless to say, I’m a huge fan of this series. I’ve been playing it for nearly 20 years now and it’s still an absolute blast. I highly recommend it for both young people and adults. Worms Clan Wars is rated E10 by the ESRB for Fantasy Violence and Mild Language. If your computer can run Pirate101, chances are it can run Worms Clan Wars just fine. It’s currently a bit pricey at $24.99 on Steam, but can often be found on Steam or other various vendors for as little as $4. I recently purchased a 4-pack of the game for $15, and I’m not exaggerating when I say the game can be found on sale somewhere on an almost weekly basis; with the Steam winter sale coming up next week, I’m certain you’ll see it on sale. We’ll be streaming it this weekend on Saturday, November 22nd at approximately 2pm Central.

UPDATE: The game is currently available at dlgamer.us for $22.41 – while this is less than the Steam price, I’d still hold out for a better deal.