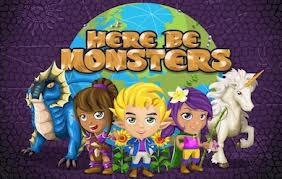 FaceBook Games. Those very words are the enough to make most people roll their eyes. From Farmville to Candy crush, there are hundreds of games of most every genre. The main problem with most of them are the invites. It seems each and every one of us get invited to those games at least once a day.

Imagine no more. There is a game that takes the better parts of many popular games and combines them into a very well made game. It is called ‘Here Be Monsters’ and is fairly new.
There is a scary drawback to the game for many. The energy system. The energy system has never been popular and just having it within the game is enough to make many potential players back away. It is very easy to replenish energy without asking people for cakes or pies. Make them yourself. Better yet, see that apple tree? Spend one energy to harvest 5 apples. Eat each apple for 1 energy. You now have a net gain of 4 energy.

Time is another thing that might worry some. Many things you craft can take a long time. For me, it allows me to step away and maybe get some sleep. You can use real money to speed things up or the like. It’s not needed. There are some bonuses like a larger plot of land or a much larger backpack. The ones you start with can be upgraded with the currency in the game.

Remember all those games you could not proceed until someone sent you the right parts? Not in HBM. You can ask or you can actually craft the items yourself.

When I said a map the size of Earth, I mean they use our planet as a base layout. There are many places you can teleport to using that stored energy. Many times you need to teleport then eat to replenish your energy before you can teleport again. For those trips, it’s best to cook some foods ahead of time. If you have some buddies in the game, you can port to their place for free. Oh, didn’t I mention you can place your home anywhere on the planet? It’s not restricted. In fact, the game starts you in London and suggests you place it far away from there. London is a free teleport as well since most of the questing starts there. Yes, there is also questing and trapping monsters. This is not Pokemon though. You trap the monsters to save them, to gather loot from them or to actually use as bait for larger monsters.

All in all, I’ve been very impressed so far and it looks like it’ll hold my attention longer than the average 2-4 weeks for a game like this. If you try it or have played it, let me know your thoughts in the comments.

Be careful because… Here Be Monsters

One thought on “Here Be Monsters”