You’re looking at the opening stanza to Firefly, and the gateway to our big Arrrgust contest…keep flyin’, my friends, and let’s give some crowns away…

THIS CONTEST HAS ENDED AND PRIZES HAVE BEEN AWARDED! THANKS TO EVERYONE WHO ENTERED! 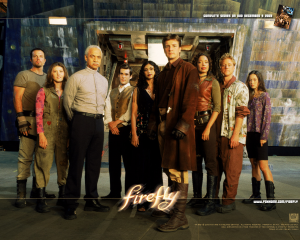 You gaze upon the cast of one of the greatest sceince-fiction programs of our time, Firefly. Perhaps released before its time to a televison-audience that wasn’t ready for sci-fi that was so ‘out of the box’, Firefly was plagued by network tinkering and eventually cancelled after only 14 episodes were aired. Television is much the poorer for this selfish and short-sighted decision. (The DVD release went on to become one of the best selling DVD sets ever.)

Okay, enough of my complaining about the fate of Firefly. Let’s move on to the good stuff! The Pirate101 skyways are full of pirates of all sorts: heroic pirates, nefarious pirates, smart pirates, not-so-smart pirates, tough pirates, scheming pirates…it takes all kinds. The crew of the Firefly was much the same; each brought a unique persona and skillset to the table. And therein lies our contest…

Spiral Radio101 wants you to re-cast Firefly using members of the Pirate101 community*! Send your new cast to spiralradio101@gmail.com. Include a brief reason why for each choice, like I’d pick John as Wash because he’s kind of goofy, and very funny, but also incredibly good at what he does; I’d pick Tracy as Zoe because she is a strong and no-nonsense kind of woman, but is also one of the kindest and most honorable people I know. Miss Narrator would be Kaylee, because she has a great light-hearted demeanor and a ready laugh, and Ditto would be Mal, simply because I love the idea of a Fabricated-American commanding the Serenity.

I realize this might require a little homework for some folks unfamiliar with Firefly, so here are some resources:

19 thoughts on “Firefly in Arrrgust – CONTEST”