A few weeks ago I made some speculation on the next 101. What’s next? Ghosts? Ninjas? Cowboys? Oh no…all wrong. A top secret source inside KI, confided in me THE NEXT 101! Much, much more after the jump.

Lisa Profol, head designer for the top secret new project, contacted me to break the news.

“KingsIsle is very excited about our new title for 2015, ModernBusiness101! We’re looking forward to bringing the family-friendly model KI is famous for to the thrill-a-minute world of international big business.”

I tried to get some more information about the game, and Ms. Profol delivered. “During character creation, new employees will join Marketing, Accounting, Administration, Logistics, Sales, or IT.” I tried to get an idea about where the departments fell in the ‘trinity’ of MMO gaming. “IT performs most of your healing, with Logistics and Administration taking over the tanking duties. Marketing attacks with brutal ad campaigns, Accounting with lengthy and confusing forms, and Sales…wow…Sales is your glass cannon. Sales is going to really make it rain for the organization or go down in flames and right to unemployment, depending on how skillfully they push the comapny’s products.”

Our discussion turned from character creation to game progression, and Ms. Profol offered some very exciting insight. “Characters will advance up the corporate ladder through different series of quests, which will include the kinds of exciting activities one encounters in modern business like meetings, performance reviews, client phone calls, awkward social encounters, and even some special holiday events! Each one will be fraught with peril, with the opportunity for raises, promotions, and new employment perks as rewards for success, but employees will have to watch out for the dreaded career-limiting move!” I pressed her on the holiday events, and she was able to show me some special (and very detailed) concept art: 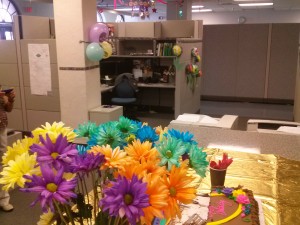 Here we see the office birthday event, including special consumables in the form of sheet cake, as well as holiday decorations like fake flowers, balloons, and streamers!

Ms. Profol also showed us some exclusive player housing photos. Here we see the ‘dorm room’ for players of ModernBusiness101 – the office: 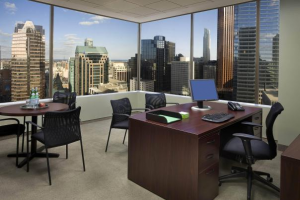 I learned that this is the default player housing for higher-level characters. Beginning characters are housed in a cubicle, but no concept art was available at this time.

Finally, I got to see some concept art of the first instance in the game – the meeting! 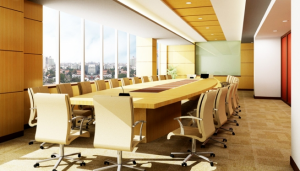 Wow…I don’t know about you, but that’s got my pulse racing! We’re going to have some incredible adventures in there!

ModernBusiness101 is due to go into closed alpha later this year, with an open beta expected Q2 2015. Until then, I’ll see you in the lunchroom.

* Lisa Profol is an anagram for April Fools. 😉 Hope you all didn’t mind our little joke! Have a fantastic week!