Steampunk is huge. With its gears and its goggles and its steam driven clockwork technology it’s this wonderful hybrid of science-fiction and history that really draws people (including just about every member of the Spiral Radio101 staff). Steampunk’s younger brother is a subgenre called Dieselpunk, and the union of the two genres is where we find this gem of an indie game called Guns of Icarus Online.

I’ve always been fascinated by airships, the more fantastic the better. I want elaborate engines and propellers and wings and decks…so permit me to offer Exhibit A:

Here we see a Pyramidion-class airship. I’d like to go into the specifics of the best way to approach the ship as a gunner, some introductory strategies for piloting the beast, and a few tips on playing an engineer on one of these vessels, but the GoI wiki does a much better job than I ever could. Suffice it to say it’s a gloriously ungainly structure and I love it. It’s one of seven different classes of airships in GoIO, each with their own characteristics. I’m WAY off the track here…forgive me. Let’s get back to brass tacks.

Guns of Icarus Online is a team-based multiplayer airship combat game in which teams of four players crew an airship in battles ranging from 1v1 to 3v3. Players take on the role of the Pilot, Gunner, or Engineer. The Pilot (often referred to as the Captain) guides the airship through the sky, as well as giving orders (which are usually taken as suggestions by most pick-up teams) to the crew. The Gunner is responsible for, well, gunning, but often must assist the Engineer in keeping the airship in fighting form. Really the only difference between the three ‘classes’ is the equipment they can carry; a Gunner can carry one piece of Engineer equipment and one item of Pilot gear, but three pieces from the Gunner kit (which consists of varied types of ammunition).

Interestingly enough, all of the action takes place from a first-person perspective, giving the game a very personal, right-in-the-thick-of-it feel. It’s a reason a lot of Skyrim players never leave first-person – it allows for total immersion. I think this was one of the features of the game I was most surprised by and one I feel really gets the blood pumping. Third person view is an option, but stick with first for a while.

It’s not a hard game to pick up. Movement is all WASD with space to jump. Taking control of a gun or the helm just requires hitting E, and repairing a damaged component…well…you whack it with a wrench or hammer. If you’ve moved your character around in Wizard or Pirate, you’ll pick it right up. 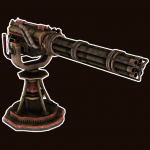 Gun control is very simple and incredibly satisfying, with a huge variety of weapons available to mount on each airship, allowing for a great deal of customization. I’m a big fan of the Whirlwind Light Gatling Gun (displayed here) for shredding armor at short to medium range and the Dragon Tongue Flame Thrower for when things get up close and personal. With 16 total airship weapons available, Gunners will find one that suits them.

Engineering is a game of prioritizing and time management. It’s easy to see what’s broken and how broken it is; things get tricky when you try to decide what do you need fixed right now and what can wait a bit. Pro tip: keep the hull, balloon, and engines intact and let the gunners take care of the weapons if things get hairy.

Piloting takes practice. Combat flight in three dimensions is always going to be challenging; combat flight in a large craft like an airship requires a good bit of experience. Thankfully the game has a robust tutorial and practice mode so you can take an airship out and get comfortable driving it.

Technically, the game is gorgeous. The artwork is very creative, and while the graphics aren’t uber HD with zillions of polygons, it still looks fantastic. The only nitpick I have on it is the sound. I feel like the sound of some of the guns is a bit anemic and I never get a real sense of raw firepower from the audio. The in-game voice chat is quite clear, however, and really helps teams communicate and plan more efficiently. It also, unfortunately, allows some of the world’s gaming trolls to engage in some non-family-friendly language. Thankfully these are few and far between in GoIO.

Finally, the game’s community is friendly and tight-knit that is, for the most part, willing to embrace and foster new players. The ratio of cool people to trolls is very strongly on the side of the good folks, and that’s an excellent sign.

Here’s the important part. As of this posting, the game is $5.09 on Steam. It also features a cash shop in case you want to ‘pretty up’ your in-game avatar. I’ll confess, I spent $.40 on two cool pairs of goggles, $.50 on two sharp hats, $2 on an outfit and about $.50 on various clothing dyes (but I don’t have a problem – I could quit at any time!). You can also unlock some cosmetic accessories and clothing dyes through gameplay.

All in all, I’m very comfortable giving Guns of Icarus Online a strong recommendation. I think you’ll find it well worth the five bucks. It’s a great jump in/jump out game that works as a nice palette cleanser for Wizard and Pirate, and will probably have you drawing interesting comparisons between GoIO and P101. If you got a Steam card or a big check for Christmas, this might not be a bad place to spend some of it.

Guns of Icarus Online is unrated by the ESRB, but similar games are rated T for Teens for Mild Violence. While you never see a human being take actual damage, there’s a lot of weapon fire and airship destruction is quite graphic, complete with fiery explosions and bit and pieces of airship debris scattering through the air. If you’re under 13 (and even if you’re under 18), you’ll want to double-check with your folks first.

Thanks for reading – hope you enjoy the gameplay footage:

2 thoughts on “Fire the Guns! (of Icarus Online)”