I trust that everything happens for a reason, even if we are not wise enough to see it.
-Oprah Winfrey 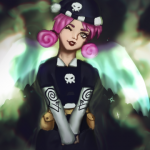 Last week, KingsIsle made a business decision. I’m sure it was very difficult, but having been an observer of the business end of gaming for eight years now, I’ve seen it happen enough to know it’s a sad reality of this industry. While I’ve always felt for those people who were let go, this is only the second time it’s really touched my world. Today, our Associate Community Manager, Leala, better known to us as Professor Greyrose and to some of us as Leesha Darkheart was laid off and will no longer be serving the Spiral community in that capacity.

I’d like to take a minute to thank her publicly for what she’s meant to all of us, but, most of all, to me.

For all of us, she’s been a voice for the community on both sides of the fence. As a podcaster on Ravenwood Radio she interviewed a number of KingsIsle employees for the Spiral community, recorded dozens of news and opinion podcasts, and even shared stories of her real-life experiences with KI employees. I still love her story about her visit to KI way back from the pre-Celestia days.

As Professor Greyrose, she’s been a constant and accessible point of contact for us as a fan site as well as for the community in general. She lived in the trenches of the forums, kept us all informed and listened to our comments on social media, and suffered the slings and arrows of WAY TOO MANY frustrated and angry members of the Spiral community; Leala was one of the public faces of KI, and she took a lot of good and a lot of bad with a cheerful smile and a happy demeanor that few could match. I’m quite sure I would not have been up to that task.

I’ve told this story many times, but without Leala I never would have tried podcasting. Her old World of Warcraft podcast, Epic Dolls, was the first that truly convinced me that “regular people” like myself could do this. And it wasn’t because her show was bad or lacked for content or polish – it was a damn good show; I’ve listened to every episode (some more than once). It was because I could tell Leala was a smart, creative person who loved the game and the community and wanted to share that. I owe her for putting me on the path to a hobby I’ve loved since 2008.

I started playing Wizard101 back in 2009 after Leala, while engaged in a spirited discussion with my…let’s go with feisty Inside Azeroth co-host, David, emphatically claimed that there were MMORPGs that were innovating, and Wizard101 was one of them. I started it that day and played for six hours straight. The next day I rerolled as Stephen Spiritcaller, my Necromancer that I still (occasionally) play today.

About six weeks later, we recorded the first episode of Ravenwood Radio, which was an amazing learning experience for me, aside from being just a lot of fun. There was so much magic (pun totally intended) in the Spiral for me then, and it was great to share it with the community every other Wednesday when Leesha and I took to the airwaves. I learned so much about broadcasting live, about editing, about community relations, and just about being a better podcaster. Not to mention we had lots of really fun parties.

Even after she moved on from the show, Leala continued to teach me a lot about the art and craft that I still practice today. I’m quite certain I wouldn’t be doing Spiral Radio101 today if not for everything I learned from her.

So please take a moment today to shoot off a tweet or a Facebook post or maybe write something on your own blog or just leave a comment here. I encourage you to thank Leala in your own way, and make sure she knows exactly how much she meant to you as a community leader. If being her friend has taught me anything, it’s that Leala will land squarely on her feet. We’re all rooting for you…just please don’t end up at Riot – those people are mean.

You also might think about wishing Tom, our current Community Manager, good luck and maybe give him a break for the next few months, because his already insane workload just tripled.

4 thoughts on “Thanks, Leesha Darkheart”